Have you ever found it frustrating to try and wrangle your team or co-workers into cooperating during an online discussion? If so, you’re not alone. Fortunately, you don’t have to deal with this type of behavior forever. There are certain things you can do to take control of the situation. If you need some guidance, then look no further than this article. In this post, we’ll give you some great advice for taking charge of your online IT meetings.

Never Forget to Set an Agenda Before the Meeting

The worst thing you could do is to step into a meeting without having a basic list of what has to be discussed that day. Save yourself and your co-workers from the headache of guessing what should be done and prepare your agenda at least a few days in advance. That way, your meeting participants will also have a chance to remind you of any items that you may have forgotten to include. Make sure that you only include topics that must be discussed, and to leave out any extraneous items that can be discussed over e-mail instead. Don’t forget to attach any important documents to your e-mail so that everybody will be able to review relevant information ahead of time

. Another thing to consider is to invite only the most crucial people to the meeting. You don’t have to invite an entire department to weigh in on a final decision. In most cases, you can just invite the department head and have him or her give you their take on the matter. The fewer people you need to take care of during the conference, the better. You can send minutes of the meeting to everybody afterward, which department heads can forward to their respective teams for reference. During the discussion, make sure to set action steps as you come to agreements on certain topics, according to Entrepreneur

Keep Track of the Time for Each Topic You’ll Discuss 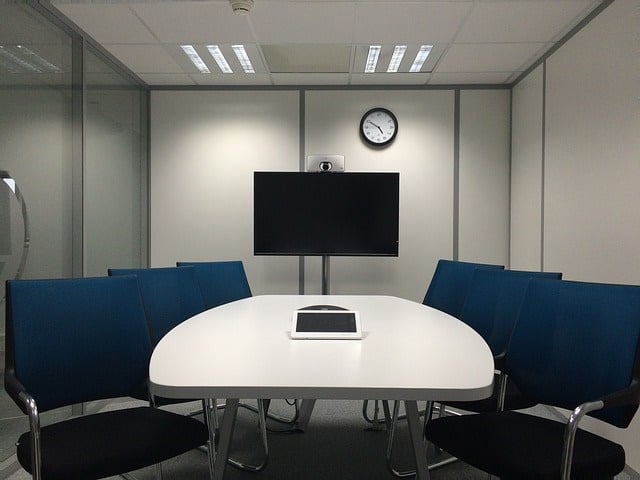 Many employees dread the hour-long meeting. Unfortunately, some meetings may even go on to be as long as three hours or more. That’s nearly half of a normal workday spent just sitting around discussing things that probably aren’t all that important! Thus, to keep the whole conference on track, make sure to keep track of the time.  If you have to set the meeting to take up only fifteen minutes, then make sure to stick to it. If you notice anybody rambling or going off-topic, gently remind them to go back to the most important topic at hand. Sure, some of your co-workers may find you a little too strict, but always remind them that it’s for the good of all the participants of the meeting. After all, who wouldn’t want to be able to go back to their desks as soon as possible? The more that every person in the conference cooperates, the sooner everybody can get back to more important work. If you’re using an enterprise video conferencing solution by the BlueJeans, remind everybody that they can refer to the recording in case they think they missed anything instead of asking other people to repeat the same point over and over.

Set Strict Rules and Stick to Them Throughout the Conference

Sometimes, people tend to misbehave because they know that they can get away with it without facing any punishment. Hence, if you’ve got a particularly rowdy crowd to handle, you may want to put some rules into place. For instance, if some of your expected participants have a habit of coming to meetings very late, then make sure to set up some consequences. You could say that you will not be repeating any information that they missed. You could also lock the virtual doors and not allow them to participate in the meeting anymore. You could even give them an unusual punishment such as making them sing a song each time they log in late, according to FastCompany. However, you can probably only do this if their input is not going to have a critical impact on the final decision-making process. Better yet, you can send friendly reminders to notorious truants who have to be at the meeting. Just tell them that time is of the essence and that it’s nothing personal if you remind them to go back to the topic at hand. They can always explore whatever new topics they think about in an e-mail thread later on, when everybody has more time to think about useful suggestions and additional information.

While you may find it hard to implement all of these changes at first, you’ll find that they’ll make a huge difference regarding your team’s productivity down the line. Remember: the sooner you put these new rules into place, the sooner your co-workers will get used to it, and the more productive everybody will be.

The 3 Most Useful Things To Have In Your Home