The Wii has finally been granted a microphone to allow on-line opponent to hurl politically incorrect chit-chat at each other from the safety of their front-room. The Nintendo WiiSpeak microphone was unveiled at E3 along with the new Wii remote, the Wii MotionPlus

.
.
The WiiSpeak microphone will be attachable to your television screen and pick up sounds to relay on-line (how it filters out background noise from that distance is yet to be seen). The first game to utilise its capabilities will be the every so cute Animal Crossing: City Folk due to be released later this year.
.
On-line slanging matches are usually dominated by teenagers with potty-mouths so GadgetHeat reckons the WiiSpeak microphone may be a gateway to tarnishing the Nintendo Wii’s wholesome family image. The other drawback of the WiiSpeak is that it is not wireless. With everyone and their mama (i.e. SONY and Microsoft) implementing wireless technology in the consoles, we’re surprised that the Wii hasn’t followed suit.
.
The WiiSpeak is expected to retail for $30 (£15) and will be available later this year. 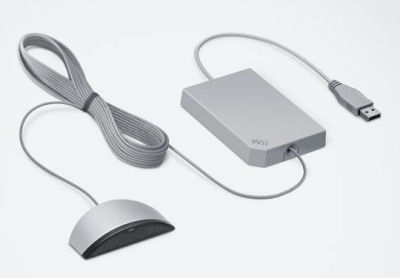 The Trilogy – Three Gadgets You Don’t Want To Miss