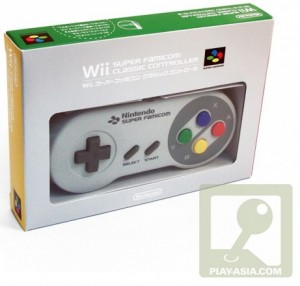 The Wii Super Famicom Classic Controller was announced last year but only for the Japanese (as usual). Finally, the rest of the world (i.e. the USA), have a chance to get their hands on this modern retro game-pad for the princely sum of $75 (plus $6 p&p).

The Wii Super Famicom Classic control-pad plugs into your existng wii control so it can interface wirelessly with the console itself. Play-Asia.com

If you think $81 is too much to pay for a Wii control-pad shaped like an antiquated SNES control-pad, then leave your hardcore-gamer pass on the table and switch the lights off on your way out.

If you are a child of the 80’s (or just cool), then the Wii Super Famicom Classic Controller is awaiting your grubby mitts and is just an import away.