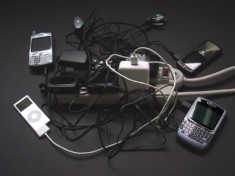 If you’re anything like us here at GadgetHeat you have probably had a whole host of mobile phones over your life. From your first ‘brick’ cell-phone complete with aerial to the latest Samsung (or Apple) touch-screen masterpiece. We’ve had them all. The thing is, every time you buy a phone, it comes with a charger…..

Great right? er, not all the time….. Back when Nokia was the top -dog in the mobile phone space you could upgrade from Nokia to Nokia to Nokia and have a crop of Nokia chargers in your top draw. From time to time this would be useful as spares are always handy but in the main, they would remain in your top draw for an eternity until you switched brand…..

All of a sudden, you had a new phone from a non-Nokia manufacturer (let’s say Motrola Razr, remember them?). What do do with all those Nokia chargers but to throw them away? Those were the days when protecting the environment was not high on the agenda (before good old Al Gore came on the scene). Nowadays we do believe that disposing of electronic waste this way is extremely damaging to the environment and we wouldn’t recommend it.

So if we’re not going to throw it in the trash, where do we put all the old (by old we mean at least 3 months – ancient, right?) electronic items that we no longer want? No longer working PlayStation 1 and 2, that old Xbox with the 3 rings of death in the cupboard and dare I say it, the Wii.

There’s only so much tat you can flog on eBay. What happens when you just want to get rid of it ethically? That’s when you find an ewaste disposal

company to take the old gear off your hands and recycle it. Yeah I said it, recycle.

Who knew you could take old electronic stuff and make it into new stuff?

Not only that, you can actually restore to such as state that you could turn around and sell it as ‘refurbished’ (we used to hate that word, we prefer to sound posh and call it electronic asset recovery

Required Tools for Every Writer

The changing face of home entertainment