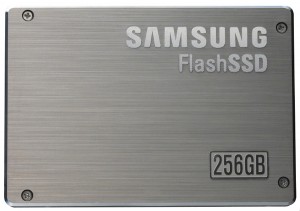 With all the fuss about solid state drives we can now safely assume that it is the HDD to be seen with and Samsung, even though they first announced it in May 2008, have released a 256GB Solid State Drive into the mass-production fray.

With sequential read and write rates of 220MB/s and 200MB/s respectively, the Samsung 256GB SSD offers improved performance on Samsungs previous SSD offerings (64GB and 128GB). You can also erase the drive at a speedy 100GBs per minute so if you have a lot of ‘stuff’ you want to get rid of quickly, you’re in luck.

The near light-speed operation of the Samsung 256GB Solid State Drive means that it can store 25 HD movies in just over 20 minutes and open your applications instantly. The price for all this speedy goodness? Samsung haven’t told us but you can bet it’s going to cost a stack.