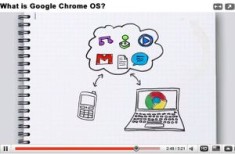 Today the big G (that’s google to you and me) released a video of the much hyped Google Operating System. Don’t get your hopes up though, the video itself is very ‘sketchy’, literally. The video is a walk through of what the chrome OS will be all about when it’s released sometime next year.

Check the Chrome Operating System Video below. For some reason it looks like they disabled embedding so you will have to hop over to You-Tube to get the full effect.