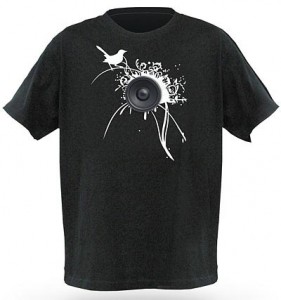 The Personal Soundtrack Shirt lets you hear the soundtrack to your life, literally. With its attached (removable) Velcro speaker, you can plug in your MP3 player and let others hear the tunes you live your life to. Whether or not they will appreciate it is another matter….

then saw that this was actually a cool idea and the Personal Soundtrack Shirt went into production. Included with the shirt is a remote control allowing you to switch between preloaded sound effects and music allowing you to have your own theme song or other amusing sounds as you go about your everyday life.

The electrical parts and the speaker are both detachable so the Personal Soundtrack Shirt can be hand-washed and even washed via machine as long as you don’t put it on a super-vigorous cycle. You may think $40 is somewhat pricey to pay for a T-shirt but can you imagine the looks on your work-colleagues faces when you stroll in to the tune of the Pink Panther? The only thing better would be walking wearing this Gremlins T-shirt