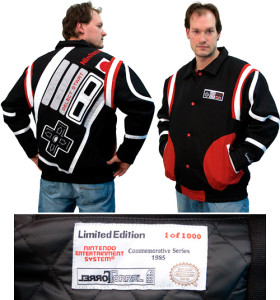 The Nintendo NES Controller Varsity Jacket only serves to prove one thing. Geek chic is dead. Now, the sad thing is we know that about 50 of you reading this post are going to think that this is the coolest thing since Bill brought out his Windows clothing line

. You 50 are excluded from any further participation. Ever.

The Nintendo NES Controller Varsity Jacket looks like it’s straight outta the 80’s and whilst this would normally give it about 100 cool points straight off-the-bat, in this case (especially with the decidedly average looking male model they’ve chosen), it just looks cheesy with extra cheese. With only a limited 1000 run planned, the NES Controller Varsity Jacket will unfortunately be a collectors item on eBay before you can say ‘i’m buying one for the memories’.

the $200 asking price isn’t too steep but if you have $200 to spend on a bit of 80’s memorabilia, we can think of a whole heap of retro stuff we would rather get than the Nintendo NES Controller Varsity Jacket. If you absolutely have to have, pop over to 80stees.com

to grab yours before it sells out.