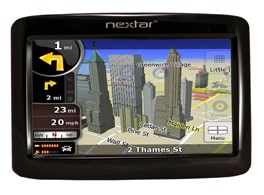 The Nextar Q4-LT Navigator solves the most annoying of problems with sat navs, (that of being inaccurate) by providing free updates for life. Operating more like software company than a hardware, Nextar have figured out that customer loyalty is the way ahead in the sat nav game.

After all, before GPS systems came along how many of us had old, tattered A-Z’s that we had used for years. They don’t build new roads that often…With this in mind, once you buy Nextar Q4-LT Navigator, you should never need another sat-nav again with all the  free updates for life you’ll be getting (unless, of course, you want something just to be cook like the Knight Rider Kitt GPS

The Nextar Q4-LT Navigator boasts text-to-speech support, both 2D and 3D NAVTEQ maps of North America and Canada and doubles up as a PMP (MP3 and JPEG). The 4.3 inch touch screen can display its 1.6 million POIs in crystal clear quality although not all at the same time of course.

Available in late 2009, the Nextar Q4-LT Navigator will set you back around $250