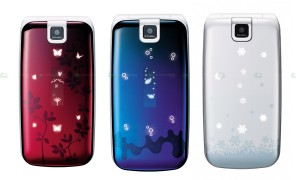 Looks like LG just don’t give a damn anymore when going after the female dollar (or Yen). Their recently announced LG-SH490 is also subtitled the ‘Make Up’ phone. Genius. Not only does it have no relation to powdering your face whatsoever, the LG-SH490 Make-Up Phone is also lousy on specs.

A poor 1.1 inch external display (what is this? The late nineties?), 2.4 inch QVGA interior display, basic PMP features and a stingy 512mb of internal memory ensures that the LG-SH490 won’t be winning any awards for technological advancement any time soon. The only appreciatable feature is its 3mega-pixel camera and, if you are between the ages of 11 – 17, the ability to add your own LED lit emoticons to the clamshell design.

Available in Smoky Red, Deep Blue and Pearl White, LG have wisely decided to restrict the LG-SH490 Make-Up Phone to the Korean market only for now so we are saved from seeing it on our shores but I don’t think the Japanese will be so lucky. I get the feeling that the like this sort of thing (hint: check out the LG Ice Cream Phone 2

Nextar Q4-LT Navigator – Always Up To Date – For Life