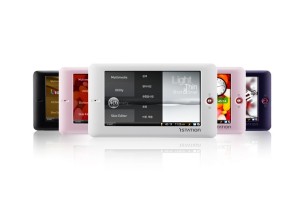 iStation’s new T3 portable media player proves our long standing view that the Koreans get all the best things first (well, not all but a lot). The iStation T3 can do it all and then some. Supporting a list of media formats that would make an Apple Touch owner weep with envy.

The iStation T3’s media capabilities are impressive to say the least. On the audio side it can support MP3, WMA, Ogg, FLAC, APE, AC3, and WAV files. The video playback of things is no less impressive with support for MPEG-4, AVI, Divx, Xvid and WMV video files. Pretty exhaustive in terms of any format you are likely to need displayed on its 4.3 inch touch screen.

The goodies don’t stop tere. The iStation T3 PMP also packs in a TV-out option, FM Tuner, Voice recorder, E-Book capabilities and a built in dictionary. The only thing we can see missing is a phone but maybe their working on that…..

Other specs include a USB port, up to 32GB of internal memory (ranging from 4 to 32GB) with an added a SDHC expansion slot, 10 hours of battery playback and the entire package comes in at 170 grams in weight.

No pricing details as yet but the iStation T3 PMP will be available in Korea come the new year. Check out the video below to see this bad boy in action.