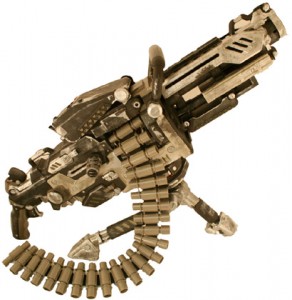 A Nerf Dart Gun isn’t going to cause anyone any trouble on the pain scale but when you transform it into a non-stop firing chaingun, it becomes the weapon of choice for any self-respecting office-warrior.

using a whole lot of batteries, soldering and shiny parts that you probably haven’t got lying around the house right now. If you are in a modding frame of mind, you can hop over to their site for a detailed blow by blow account of how they transformed their nerf dart gun into an awesome chain gun.

Word of warning though, they have added a disclaimer stating that the mod could cause serious injury or even death. Video below.

Nextar Q4-LT Navigator – Always Up To Date – For Life