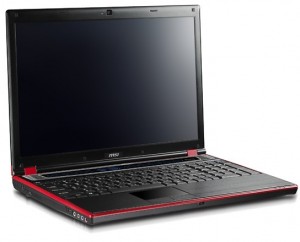 have to be one of my favourite breed and the more the merrier I say. The MSI GT627 joins this esteemed (IMHO) band of brothers and although it’s not the brains of the group, it’s no runt either.

At 15.4 inches the MSI GT627 is moderately sized with a 1680×1050 resolution, not huge, not HD but not bad either. An optional Blu-ray drive and a 6-cell battery make up the rest of its external specs. Inside it packs a 1GB NVIDIA GeForce 9800M GS GPU (it’s a gaming machine so we wouldn’t expect anything less), a Core 2 Duo CPU and a 320GB HDD (we would have hoped for a TB or at least an SSD

Rounding of the technical specs, the MSI GT627 also comes with a 4-in-1 multicard reader, an ExpressCard, HDMI / VGA outputs, gigabit Ethernet, twin USB 2.0 ports and a two-megapixel webcam. Availability and price? What would an MSI press release be without leaving out a few essential details, huh?
source