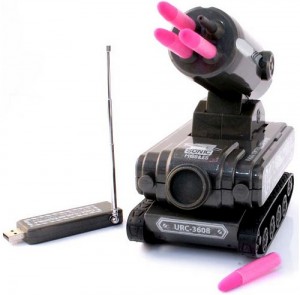 to shame. It can reload and nuke the sucker before it even has time to wind its cannon arm back. In short, the USB Tank Missile Launcher rocks and you can bomb your opponent to mild annoyance from up to 12 feet away.

but the USB Tank Missile Launcher is a much safer bet as it comes ready assembled and loaded with projectiles.

What’s even better about this baby is that it’s remote control (wireless via software and USB dongle – no actual remote) so if you are sneaky enough, you can manuover it into a position whereby people in you office won’t even know that it’s you bombing them with the pink cuddly foam missiles.

The USB Tank Missile Launcher can be on a desktop near you for a bargain (well, in relation to the fun to be had during a normal office day) $55 from RED5