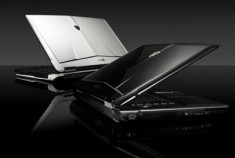 The Lamborghini VX5 Laptop not only takes after its speedy namesake in the flash styling department, it also packs more under the hood than most other laptops with a 1TB Solid State Drive ready for you to get your grubby mitts on.

It was not so long ago that SSD

‘s were a thing of novelty and wonder, the Lamborghini VX5 Laptop has it as default. Along with its Core 2 Quad CPU, 4GB of RAM and a 16-inch HD display, the laptop also comes with a GeForce GT 130M graphics card with an additional 1GB of GDDR3 memory. In other words, this baby goes fast.

Prices have not yet been revealed but with the Lamborghini name tag, Blu-Ray drive and illuminated chiclet keyboard, the Lamborghini VX5 Laptop probably going to be one for those geeks with major loot to get a hold of.

Tokyoflash Hanko » $20 If You Can Read This Thing