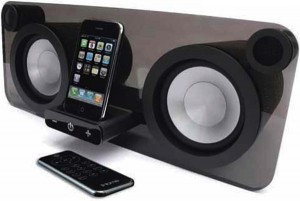 Seeing as there has been a recent dearth of iPod speaker systems (we jest), iHome have decided to release (another) one of their own to fill the (non-existent) gap, the iHome iP1 iPod / iPhone Speaker System.

We guess they were feeling like the odd ones out at CES 2009 with nothing to show so their iHome iP1 iPod / iPhone Speaker System comes out to save the day. In fairness, we do think it’s pretty good looking for something that has a lot of competition in its niche.

claim that the iP1 is the most advanced speaker system they have ever built (until the next one of course). You can also hook up other music devices via the AUX input and A/V output, making it less of a one trick (or two, if you count the iPhone and iPod as separate gadgets) pony.

and you’ll get all the juice first….