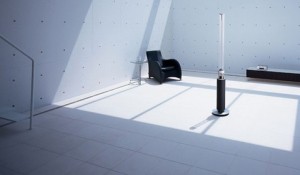 . This thing looks like a ready to go light-sabre but is in fact a self-contained speaker system ready to fill your room with bass line no matter where you put it.

The Sountina NSA PF1 (catchy name) is a six foot tall omni-directional speaker mainly built from organic glass with a vibration range of 50 to 20,000Hz. The tweeter is also made of organic glass unlike the 13cm – Sub Woofer and the 7cm Mid (If you have small children who like to touch stuff then I’m guessing that the Sountina was not built with you in mind).

The standard range of digital and analogue inputs are included including RCA, digital coax and optical TOS. You can also input up to 24bit/96kHz stereo linear PCM. As an added sweetener for those of us who like shiny-shiny gadgets the Sountina NSA PF1 comes with a super slick aluminium remote control which is customisable to your environment via the colour LCD’s and comes in black or silver.

If you have $10,200 burning a hole in your pocket and don’t mind picking up your goods from Japan give SONY a call and they’ll hook you up.