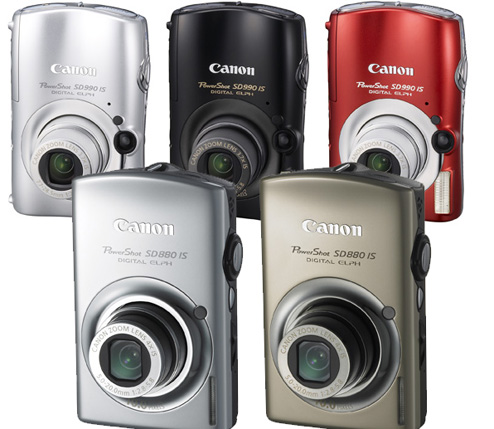 Canon just can’t releasing those point and shoot camera and the addition of the Canon PowerShots SD990 and SD880 is more of the same (if it ain’t broke…).

The Canon PowerShots SD990 and SD880 are both due for an October release, just in time for the Christmas rush methinks. Both are Digital ELPH PowerShots with the SD9900 packing almost 15 megapixels (14.7) under it’s belt, it will put your camera phone to shame.

The SD9900 also comes with 3.7 optical zoom (which isn’t that great IMHO) and is available in a cheeky red color due to Canon wanting to promote the fact they’ve managed to manufature 100 million PowerShots since first release (that’s a lot of clicking).

It’s less well endowed sibling, the SD880 comes with 10 megapixels and slightly better 4x wide-angle optical zoom, The SD880 isn’t available in red but it does come rather fetching gold, black and silver for al you bling lovers.