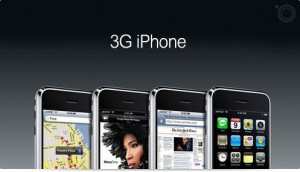 The geeks (pot calling kettle..) over at gizmodo have confirmed what we all knew. The Apple 3G iPhone will be formally introduces to the masses at the WWDC keynote on June 9th. It was previously thought that the new iPhone would be available at the years end but it will be available immediately worldwide after the formal launch in June.

I’m personally 50/50 about iPhones. I think their too pricey for what they offer and tying you into a two year contract is not appreciated by the GadgetHeat staff. That being said, there will no doubt be added goodies to go with the 3G functionality that have yet to be revealed by Apple (they love to tease).

After the generally negative response to their sales practice last time round (i.e. tying you to a particular provider in order to get your iPhone, fixed price for handsets etc), Apple have revised their worldwide partnering policies and it looks like the new phone may be available on multiple networks or tariff options at the same time which is good for those of us who want to get one…

Tony Montana Eat Your Heart Out

Napster Steps Up Its Game