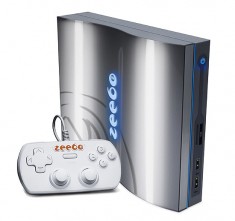 The Zeebo Games Console obviously isn’t one to be trifled with. Just when you though Sony, Nintendo and Microsoft had the console

market locked in a three-way gang-bang, Zeebo steps into the game with their cheapo (^^) games console.

Launched in Brazil but soon to spread to other emerging economies, the Zeebo Games Console isn’t just a flash in the pan regional knock-off, it actually has some decent games publishers (including Namco and Capcom) making titles for it. The USP (Unique Selling Point for you non-economists) of Zeebo, is its free high-speed 3G network allowing games publisher to distribute their titles cheaply and easily to the poor masses.

Don’t expect the kids to be clamouring for this one next holiday season but if you find yourself in Brazil or a less developed country than the United States and in need of a cheap, quick gaming fix, then the Zeebo Games Console could be just what you need.

Samsung N120 Netbook » Slighty Different From The Other 101