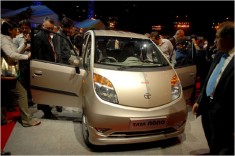 The TATA Nano car proves that the Indians know how to cut back in a recession. This is officially the world’s cheapest car, costing little over 100,000 Indian rupees ($2,000 / £1700). Don’t expect to go racing in this though, it runs on a 623-cc 2-cylinder engine with about 30 horsepower….

The main reason why the TATA Nano Car is so cheap is due to the ever so wide corners the Tata Group cut in building this. One windshield wiper, 12-inch wheels and a single shiny piece of material that makes up the dashboard are just some of the sacrifices that had to be made to reach this price point. Not to mention that everything from Power steering to power brakes being optional on the base model and Airbags, antilock brakes and radio not being available at all, and you begin to see why the TATA Nano is so cheap.

Deliveries will begin in India from July with applications for the waiting list (which will cost potential owners $6 just to apply) being accepted from April. Somehow, I can’t see the TATA Nano car being driven in NYC. 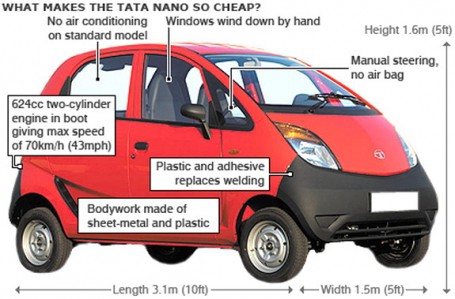 Zeebo Games Console » Wants To Play With The Big Boys