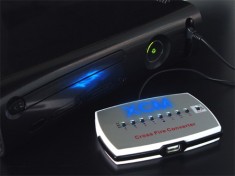 The XCM Cross Fire Adapter for Xbox 360 finally goes on sale today and is destined (or marketed) to change the way true gamers can perform their game-breaking moves and complicated button-bashing by giving them access to macros and TurboFire even if they are using the bog-standard Xbox 360 controller.

But that’s not all, the XCM Cross Fire Adapter also allows you to hook up a PS3 controller, old Xbox controller and wired Xbox 360 controller so that they can interact seamless with the Xbox 360. Perfect if you are old school or a PlayStation head who is just beginning to make the crossover to Xbox 360.

Available now for $84.99, the XCM Cross Fire Adapter for Xbox 360 should be available on-line from Extreme-Mods