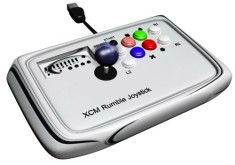 The XCM Rumble Joystick is the latest in the long line of PS3 gaming joysticks that aim to bring the arcade experience to your front room. The difference this one brings? It rumbles (as you would have guessed by the name had you been paying attention).

Saying that it just rumbles would be doing the XCM Rumble Joystick a disservice. It also rattles, rolls and generally gets down to do its thing (kicking-ass). Touted as the first PS3 joystick to have a native rumble, the XCM also comes with four macro-programmable memory buttons so you can pre-load your 17-hit combos and unleash the whoop-ass at the push of a button. There are also independent rapid and turbo fire buttons so you can get things done just that little bit more quickly.

Release date is expected to be within the next few months but pricing for the XCM Rumble Joystick is as yet unannounced.

VertaBrate Back Massager » Back Buddy