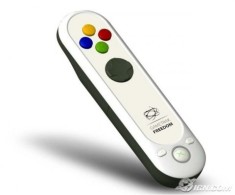 Wireless connected to the gamers display via two mounted sensor bars, up to four Xbox 360 Gametrak Freedom controllers can be used simultaneously. Packed with more accelerometers then you can shake a stick at (pun intended), the controller has no trouble recognising pitch, roll and yaw, distance, orientation, and speed.

The first set of games to make use of the Xbox 360 Gametrak Freedom controller will be available at launch and include Gametraks own title – Squeezeballs. Third-party games are to follow. Set for a Q4 release we can’t tell you the price as yet but there will also be a PS3 version of the Xbox 360 Gametrak Freedom controller pencilled in for 2010.
source

Watchmen Bearbrick » For Fanboys Who Want A Cuddle