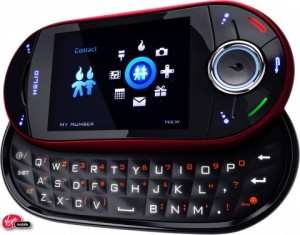 The Virgin Mobile Helio Ocean 2 must be good. Any mobile handset that has a sequel, has to have been a hit in the first place in order for the makers to produce another, right? Then again, they beat the Motorola RAZR to death so this isn’t always true….

Virgin’s new handset of the month, the Helio Ocean 2, builds upon the success of its predecessor (funnily enough, named the Helio Ocean 1) by giving buyers unlimited evening and weekend calls (nice) with unlimited cellphone to cellphone

The Helio Ocean 2 comes in a fetching red and black mix, a 2.6-inch touchscreen, tabbed browsing, an optical navigation sensor and a slide-out QWERTY keypad.

On the software side you get IM including Google talk, Exchange email access (in your face Blackberry

) and an office suite including Word, Excel and PowerPoint. Virgin have also been kind enough to throw in a 512MB microSD Card just to say thank you for buying their Helio Ocean 2, aww.

Available fro $156 from February 12th, a black version of the Virgin Mobile Helio Ocean 2 handset will be available later in 2009.