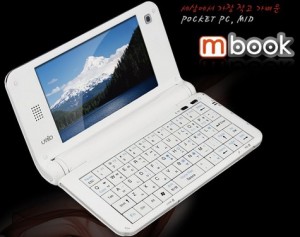 The rumoured, dismissed then rumoured again UMID M1 mbook has finally been caught on video during a hands on. The mbook (they better patent that before it’s too late), is the smallest notebook yet and combines a diddyness of a MID with the power (relatively speaking) of a notebook.

The UMID M1 mbook ships with a 4.8inch screen which is somewhere in no-man’s land. Great if it was just a MID

, poor it’s a notebook. With the brain power being supplied by an ATOM intel cpu, don’t expect this pocket-pc to be running any heavy duty applications but for a quick and easy (we would have said cheap but it’s expected to retail between the $400 – $500 mark) PC and internet on the go solution, it is pretty neat.

It also looks like the UMID M1 mbook will be able to run both Windows and Linux which is not to be sniffed at.