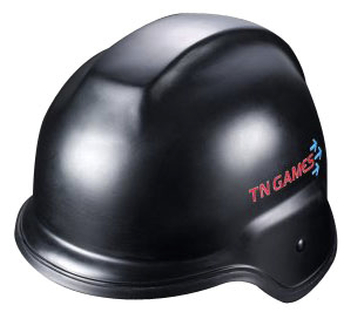 If your a first person shooter fan, TN Games have released the HTX helmet which might make you stop and think before rushing headlong into a fire-fight. Why? Because every time your character on screen gets shot in the head, you’re going to feel the bruises….

When you’re playing a game, you can often brazenly walk around in a fire-fight taking a few shots ‘bravely’ in order to achieve your objective of slaughtering every other moving thing on screen. Not too realistic. With the TN Games HTX Helmet with Force Feedback, you better find some cover and find it fast.

The HTX Helmet works with compatible games to give a sense of realism to your average shooter. Every time you take a headshot, the Force Feedback produces a sensation in the helmet letting the wearer know that their brains just got blown out. Cool.

We’re not sure how strong the Force Feedback is going to be but we hope it wont be as strong as an actually gunshot otherwise there are going to be some traumatised kiddies and some parents with expensive lawyers….

The TN Games HTX Helmet with Force Feedback will be available from next year.

iPhone Visual Speed Dialler – Put A Number To A Face