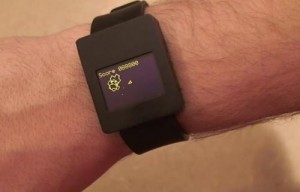 The Asteroids Watch by John Maushammer would give TokyoFlash a run for their money. The wristwatch looks like it is based on many a 80’s classic space blaster and even has an inbuilt tilt function so you can alternate the action on screen by moving your wrist.

Designer John Maushammer first came up with the (non-playable) ping-pong watch which was cool enough but the Asteroids Watch adds an extra chill to the cool points. It is unclear from the video weather the game would be playing non-stop but there must be a way to put it into sleep mode as having asteroids being blown up on screen non-stop could get annoying (like when you needed to tell the time….).

No word on whether John Maushammer’s Asteroids Watch will ever go into production but we get the feeling that with the fervour for all things retro, he could be in line to make a mint if these things can be mass produced by a swanky Japanese manufacturer (think TokyoFlash