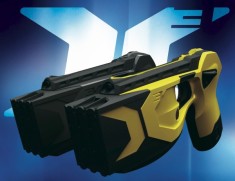 The TASER X3 Triple-Shot Stunner is just deneme bonusu the right kind of weapon for subduing large gatherings of peaceful demonstrators. You can hit three of those do-gooding suckers at once making them remember exactly why you took that job in law enforcement in the first place – they will respect your authority.

Obviously the TASER X3 Triple-Shot Stunner is only officially available to law enforcement types but we all know that from the back of a lorry somewhere in the world, one of these is already in the hands of a 15 year-old high-school kid. Be afraid.

Video of the TASER X3 Triple-Shot Stunner in action below.