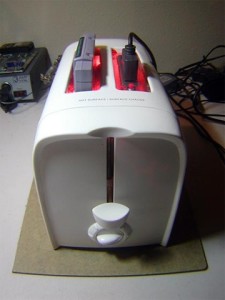 before it, the Super Nintoaster is a heavily modded version of the Nintendo gaming console, complete with lit-up insides when the toast lever is depressed. Sure to look at home on your kitchen breakfast bar as well as hooked up to a wide-screen TV, whatever you do, don’t put any toast into it.

Modder Vomitsaw (wonder what his mother calls him) took his past experience of shoving consoles into toasters to come up with the Super Nintoaster that actually loads whatever game cartridge is currently lodged inside it. This mod has been getting a lot of stick on some some of the snobbier gadget blogs but we are actually quite fond of it. If he could do the same thing with a PS3 though, then we would be impressed. The question is, has anyone got the balls to take apart a PS3 like that in the hope they can get it to work again once inside a toaster? We await…..