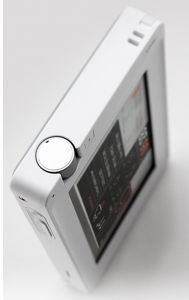 The Iriver P35 is one of those increasingly common breeds, a WiFi PMP. This gives it a big thumbs up from us ’cause we loves us some WiFi on our portable devices (Sidekick

et al take note). Reigncom’s new P35 personal media player has a distinctly ‘boxish’ look to it but it’s the UI where it pulls out the stops.

Touchscreen a pre-requisite, the Iriver P35 shows-off the iPhone-like SPINN navigator, allowing users to use the accelerometer for auto-portrait and landscape orientation. The standard P35 comes with 8GB of storage with the 16GB version coming with options for DMB television, remote control and WiFi. A generous 4.3-inch touchscreen LCD is included in both models meaning that the WiFi edition of the Iriver P35 has plenty of space for web-browsing.

No pricing details as yet, expect the Koreans to get the first dibs with the rest of the world scooping up the Iriver P35 WiFi Media Player much, much later (if at all).
source