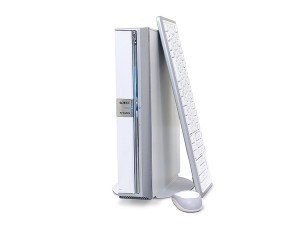 are getting tinier and tinier and the PC looks like it’s getting left behind with Dell still churning out their well built sturdy brick machines.

Sotec is having none of that however and has released the slimline PC Station DS7010. On the face of it it looks like a slightly bigger Nintendo Wii put underneath the glossy exterior (always wanted to say that) is a fully functioning PC.

The Sotec PC Station DS7010 is equipped with a digital TV tuner, Intel Pentium Dual Core processor (2Ghz and 2.4Ghz versions) and a NVIDIA GeForce 7100. What really stands out apart from the design, is the fact that the PC is only 78mm and even though there are slimmer desktops, 78mm is pretty svelte for a non-laptop PC.

The added HDMI interface hints at true HD television on your desktop which in the current climate of everything HD, is a definite step in the right direction. The Sotec PC Station DS7010 is expected to retail for between 370€ and 553€ depending on the specification.

No Time To Kill? Use The Kill-A-Watt Button