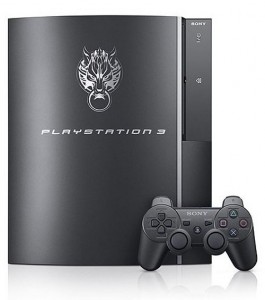 SONY have unleashed yet another limited edition PlayStation

In truth, we would have been more impressed if they had released it with a SSD

but meh, we’re picky. The limited edition SONY PS3 FFVII Edition has been released in honour of the re-release of the Advent Children Anime DVD. The cartoon (yeah, we said it, it’s a cartoon) features an extra 30 minutes of new footage to feats your eyes on.

No word as yet on a world-wide release for the SONY PS3 FFVII Edition so our Japanese friends can enjoy the console all to themselves for now (unless of course you’ve heard of a little thing called ‘import’).