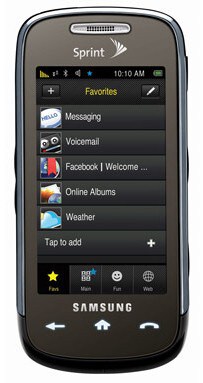 Looking like a sleek mini-me, Samsung have officially announced their Sprint Instinct S30 also known as the Sprint Instinct Mini. As per the usual drill, Japanese shores will get their hands on the handset first with the rest of the world to follow.

We have known about this phone since CES2009 and although the Samsung Sprint Instinct Mini looks Ok-ish, bearing in mind the trouble had with the larger Sprint Instinct, we were not holding our breath. Full details and specifications are yet to be announced but we’re expecting the usual slew of touchscreen (3.2 inches), medium-megapixel count (2 to be precise) and propriety services.

to get the hook-up.