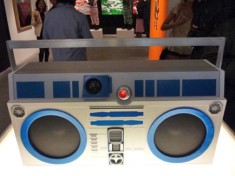 Anything Star Wars related automatically gets 1000 bonus cool points and the R2-D2 Ghetto Blaster gets an extra 1000 just for being R2-D2, one of our favourite gadgets of all time. Not able to make video phone calls or make smart-alec and yet undecipherable comments to old CP30, the R2-D2 Ghetto Blaster Boombox still has that air of ‘trust me, I’m R2-D2, I know what I’m doing’.

The R2-D2 Ghetto Blaster is unfortunately just a piece of plaster-mould art by artist Bill McMullen as part of his ‘Hype, Hustle and Rip-Off’ collection (whatever could he mean?) so you won’t be seeing this exact model on the shelves any time soon (although I bet if one you intrepid lot searched the interweb hard enough you could find one, probably in Japan….).

can fall back when the R2-D2 Ghetto Blaster Boombox becomes a reality (and it will, in a galaxy far, far away). Put your Death-Star T-shirt

on and get down the force funk.
source