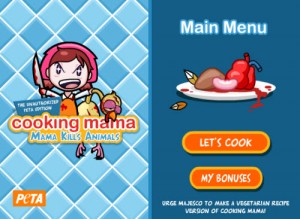 The popular Nintendo DS game Cooking Mama just got an unwanted remix from PETA. The forthright animal activists, having not kidnapped or ambushed anybody for a while, have produced their own (illegal) version of the popular game titled – Cooking Mama: Mama Kills Animals.

The flash game, released just in time for the holiday season, gets players to prepare a turkey in the most gruesome and bloody manner possible with encouragement such as ‘meaner than mama’ and if you get a low score by being too nice to the turkey, you will be admonished with the words ‘don’t be a saint!’

PETA are pass-masters at generating publicity and their Cooking Mama: Mama Kills Animals has done just that (it ended up in GadgetHeat

You would think that this would make PETA happy except that the majority of the press release is taken from quotes from the fictional Mama of the game with statements such as her ‘only goal is to ensure you leave the table well fed.’

Don’t think anyone is taking this too seriously, fun flash game though…or is that not the point? Super Obama World