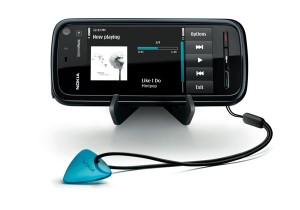 After much hype, rumour and speculation there is yet more hype rumour and speculation that the long awaited Nokia 5800 XpressMusic (also known to many who have been following the hype as the ‘Tube‘) has arrived. Good news? Sorta. It looks like the Nokia 5800 XpressMusic Tube is going to be available everywhere except the US and most of the EU. Bummer.

Nokia’s PR men have released a statement that the Nokia-5800 XpressMusic Tube will shortly be on sale in Russia, Spain, India, Hong Kong, Taiwan, Finland and ‘others’ which means no US and no UK, France or Germany. Forgive us for being blunt but wouldn’t the three aforementioned countries be the kind of premium markets that a snazzy gadget

The Nokia-5800 XpressMusic comes with 3.2inch touchscreen (at last Nokia, touchscreen at last), 8GB memory and 3.2mega-pixel camera. After having witnessing the launch of the iPhone 3G and Blackberry Storm, Nokia may be thinking that it is too late to cause a stir with their device as all the features are now relatively common but after all the hype, the Nokia Tube is still a highly anticipated phone.

When it decides to show its tardy face on these shores we’ll let you know. In the meantime, I’m off to await the arrival of my new iPhone 3G….