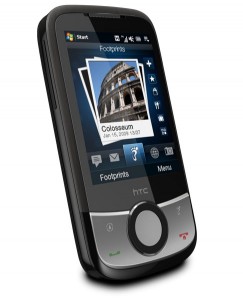 With GPS enabled phones fast become the norm, HTC have realised that functionality isn’t enough; it has to be a good GPS enabled phone and the new HTC Touch Cruise handset with Footprints application aims to deliver.

The new HTC Touch Cruise with Footprints handset definitely looks the part. More svelte than its predecessor, the handset has also been redesigned to give it the ever-so-common iPhone -clone look. Whether that is a good or bad thing depends on how much you like iPhones.

location. The handset is also enabled with both GPS and assisted-GPS meaning you have no excuse for getting lost if you own one of these (assuming you know how to read a GPS of course).

Available in Q2 2009, the new Touch Cruise handset actually look like it may be a minor cult hit amongst those that look for quality rather than iPhone clones. Be preapred for the $500 – $600 asking price though – steep.