The Apple iPhone 3GS. We’ve known its coming for some time and the day has finally arrived. The new Apple iPhone 3GS comes with all those things we’ve been waitng for, a front facing camera, 3.0 operating system

, cut & paste functionality and a system wide search feature. Read the full breakdown of all the Apple iPhone 3GS’s features below. Palm Pre fans look away now (The ‘S’ in 3GS stands for’Speed’ BTW. According to apple, it is faster than the old iPhone but we’ll wait for advertising standards to confirm that one…)

Speed
• The iPhone 3GS has a new processor built-in. Apple claims that it is up to two times faster than the previous generation: Launching messages is 2.1 faster, load the NY Times in Safari: 2.9 times faster. It also consumes less, which has an impact on the improved battery life.

Camera
• Increased resolution to 3 megapixels, and—according to the Apple—much better quality under all conditions.
• New camera, with auto focus, auto exposure, and auto white balance.
• You can also tap to focus, changing white balance in the process. That is really neat, if you ask me.
• Special macro and low light modes.
• The camera also supports photo and video geotagging.
• Any application can access all the camera functions now.

• It supports video, 30 frames per second VGA with auto focus, auto white balance, and auto exposure.
• Can trim video with a tap of the finger, and share it with MMS, email, MobileMe and YouTube.

Special features
• It has a compass application, which works with the included magnetometer. It’s integrated into the new maps, showing orientation, alongside longitude and latitude.
• Voice control. You can now talk with your iPhone, Enterprise-style. You can instruct it to play similar songs to the one you are playing, or call people.
• Nike + support built in.
• Supports accessibility features, like zooming on text, inverting video, and voice over when you touch whatever text is on screen.

For those who like pictures, we’ve also got the comparison chart below: iPhone 3GS vs iPhone 3G 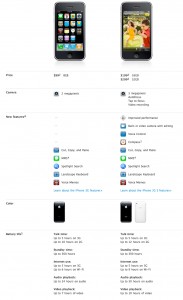