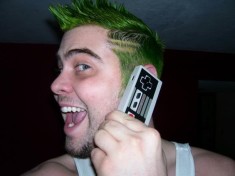 This NES Controller Phone mod stuffs a Samsung Eternity into the shell of the retro gaming-pad to pretty cool effect. Modded by green haired Nintendo fan Taylor Merrill, the phone appears to be fully functional with the back and side panels made from a NES controller complete with d-pad, start and select buttons et al.

It doesn’t look like the Nintendo A and B buttons actually work with the NES Controller Phone and they are just there for the look but the Samsung Eternity crammed into the shell of the controller is fully funtional and retains its touchscreen goodness. iBoy

eat your heart out.

It would have been very, very cool if Taylor had somehow managed to get the Nintendo NES gaming-pad buttons to interact with the handset but maybe we’re just being greedy. Video of the NES Controller Phone below.