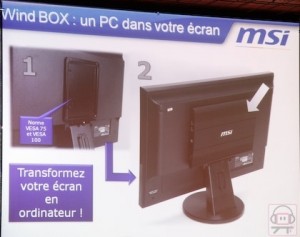 After the release of the HP Mini-Q 2030 Nettop

earlier in the month, MSI

, not ones to be left behind, have revealed their own nettop, the Windbox (now there are so many jokes to be made, but we’ll leave it for now). The MSI Windbox fits snugly onto the back of any VESA monitor giving you a refreshingly sparse desktop PC all-in-one set-up.

Being a nettop you shouldn’t expect the most powerful of specs in the world but the MSI Windbox does hold its own with an N270 Intel Atom processor, upto 2GB of RAM and upto 250GB HDD. Only available with Windows XP at the moment, it also comes with Ethernet, WiFi and 3 USB ports. Not bad for something you can just tack onto the back of your VESA monitor.

Release date is likely to be early 2009 for around the $300 (£160) mark. The MSI WindBox nettop is a step in the right direction as far as nettops go. Small, unobtrusive and relatively cheap. If your in a market for an easily portable laptop (weighs around half a kilo) but with big-screen desktop benefits then the MSI WindBox may be up you street. Just make sure you don’t break it otherwise things may get a little smelly (get it? break it; break wind? – Lame, we know). 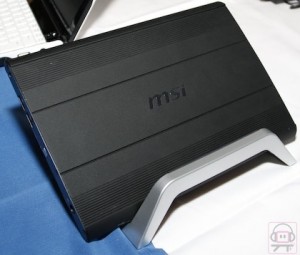 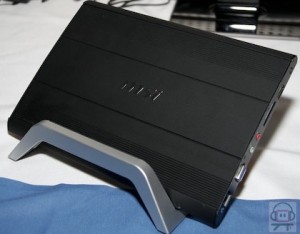 Tetris and Breakout Piggy Banks Can Save The Economy