Days after the xBox 360 gets an Arcade style control pad

, Motus ratchets up the xBox 360 loving by releasing the Darwin, a motion controller for the xBox 360. Wiimote, eat your heart out.

The Darwin is a self contained unit (no need for infra-red reference points and the like) much like a mini GPS. Motus claims that the xBox 360 Darwin goes beyond the current capabilities of the Wiimote but from watching the video below, its usage looks pretty similar.

What is different about the Motus Darwin is the fact that the controller can be used in three fashions, 2-handed, split it up for a controller in each hands and give one to a friend for a two-player gaming experience.

The Motus Darwin has no set release date as yet but with the success of the Wiimote, xBox is going to be in need of a decent motion control competitor soon and the Darwin looks set to be in pole position. 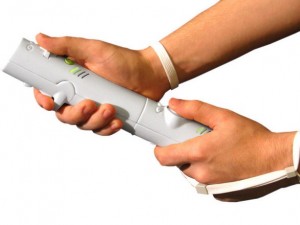 MAXELL VRSP-4000 – 4th Generation And Beyond