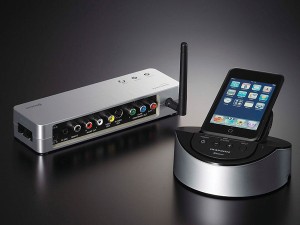 Despite the current glut of iPod docks

, Marantz have come up with their own take with this wireless iPod dock (no word of model name or number). Via a receiver attached to the audio system of your choice, a wireless iPod cradle streams music and video from your iPod to the system using Bluetooth 2.1 + EDR A2DP and Bluetooth AVRCP.

The Marantz Wireless iPod Dock supports multiple cradles which also double up as charging units. The receiver comes with video out so it is assumed that you can also stream any videos stored on your iPod to an external device but details are still sketchy as to the full capabilities.

There has been lukewarm reaction to the release with doubts expressed over its audio streaming capabilities and no word on the Marantz Wireless iPod Dock official price or release date as yet.