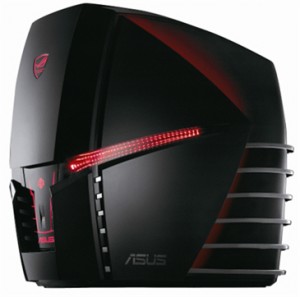 We have been going gaming-rig

crazy these past few weeks and the ASUS ROG CG6190 is the latest hardcore gaming PC we cast our beady eyes upon and it looks to be one of the best. The ROG CG6190 boasts an Intel Core i7 CPU bundle with the X58 chipset making it as speedy as Mr Gonzales himself, it also packs a hefty Turbo Mode backup….

According to the press release, the Intel Core i7 delivers a 52% increase in processing speed over previous Quad Core machines (what, they couldn’t get it to 55%?). What’s really interesting about the ASUS ROG CG6190 is its so called ‘turbo mode‘ that kicks in during peak processing demands. This turns on an additional 20% of factory overclocking which is nice to have in your locker and provides some future-proofing.

With up to 12GB DDR3 1333 memory, 4TB of storage and a built-in ‘biometric fingerprint scanner’ for security ASUS has gone all out to muscle other gaming rigs out the way with their new (big) baby.

Surprisingly ASUS has not released pricing details of the Core i7 ROG CG6190 as yet but if you haven’t got at least 15 large sitting around on your coffee table, don’t bother enquiring. Specs like this don’t come cheap.