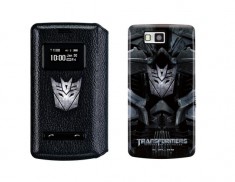 The limited-edition Transformers LG Versa phone is a product of the partnership between LG and Dreamworks to promote the upcoming Transformers sequel, ‘Revenge of the Fallen’. Looks like the LG Versa was chosen due to its modular nature with the ability to add a qwerty keypad, gamepad for playing games and external speakers to the handset. Kind of Transformer-like. Sort of.

No comment as to whether the new Transformers film will be any good, but the limited-edition Transformers LG Versa phone looks okish if you’re a fan of the movie. The handset comes with a Decepticon logo on the front and an image from the movie plus release date on the back. Not that great of a product differentiation if you ask me but then again, if the xbox 360 can get away with painting the unit red and causing such a stir for the Red Resident Evil xbox 360

You can get you hands on the limited-edition Transformers LG Versa phone sometime around or just before the release of the new Transformers movie. Price is expected to be the same as the original LG Versa, around $200.