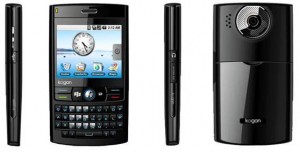 Hot (or not so hot) on the heels of the G1, the next Android powered phone up to bat is the Kogan Agora Pro, an Australian handset that will be made available internationally in 2009 and is available for pre-order now. On the face of it, the Kogan Agora Pro looks a lot better than the G1 and gives Google Android

fans a chance to lift their heads up after the shame of the fugly G1 (IMHO ^^).

The Kogan Agora Pro is refreshingly available without contract and packs a reasonable list of features including 3G, WiFi, GPS and a QWERTY keyboard, which makes it look somewhat Blackberry-ish. As required by today’s button-shy market, the phone also comes with a 2.5inch resistive touchscreen for those of us who have forgotten what buttons on a cell phone are for.

The mobile handset also packs a 624MHz processor under the bonnet and 128 MB RAM which should make application start-up relatively speedy. Although initially an Australian product, the Kogan Agora Pro Android Phone is available for pre-order world wide and the phone will start shipping in January 2009.

How much we hear you bay? $399 for the pro version and a standard Kogan Agora will also be available for $299, without the WiFi, GPS and a camera (saying that, the camera is only 2 megapixels so not much of a loss).