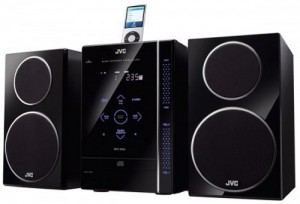 JVC has come out of the wilderness grown and sexy with the release of two new audio systems, the JVC UX-GN6 & UX-LP5 Micro Audio Systems. Both come with iPod docks and the JVC UX-GN6 has enough touchscreen functionality to keep your right hand happy for a week.

The JVC UX-GN6 Micro Audio System is motion sensitive and can be turned on by waving your hand in front of the touchscreen (this makes us wonder about the practicality say of having a pet or small child in the room wondering past it when you’re trying to get some sleep and turning it on). The system also comes with ‘laser-touch‘ meaning functions such as the volume and play / skip options can be controlled by sliding your fingers across the appropriate parts of the touch screen.

Design-wise the JVC UX-GN6 Micro Audio System is pretty slick to look at, coming in a futuristic glossy black finish and featuring an iPod dock on top. With touchscreen illumination via blue LED’s, video-out allowing you to watch your iPod videos via an attached television and 120 watts via 2 two-way speakers the JVC UX-GN6 Micro Audio System is a tidy package. Available for a not too steep $199 this March.

and had an idea….