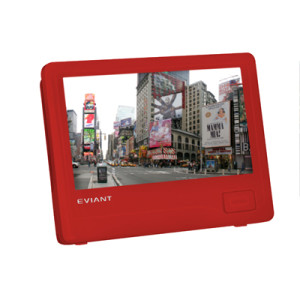 The Eviant T4 and T7 Portable Digital Televisions are tiny. Coming in at 4.3 inches and 7 inches respectively, these mini-TV’s could easily pass for digital camera frames.

The Eviant 4.3 inch T4 television is aptly named ‘The Card‘ and is wide-screen LCD available to receive digital channels wirelessly and stream on its tiny frame. It can receive over-the-air digital broadcasts without any additional hardware or subscription service. Available in a range of ‘fun colors’ the Eviant 4.3 will cost you a less than mini $169.99 when released in February.

The Eviant 7 inch T7 television is much the same as its smaller brother and (like the T4) also comes with a built-in Lithium-Ion battery, built-in speakers and included AC and car adapters. Both units are also available with remote control although at that size, you better be sitting pretty close if you’re actually going to see what’s going on on screen. The Eviant 7 inch T7 television will be available for $199.99 in February.