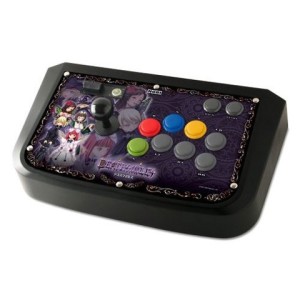 The Death Smiles Arcade Stick looks reasonably cool but to be honest, gadgets with pictures of pre-teen Japanese girls tend to give me the creeps (maybe it’s just me). By all accounts though, Death Smiles is a rather decent game and pretty big in Japan (not playing to stereotypes then).

After seeing the SFIV arcade stick

and the HORI arcade stick

, the Death Smiles Arcade stick is one for fanboys (and girls we hope) only. Nothing outstanding to report apart from the interesting artwork and the fact that it’s made for the xbox 360. If you want everyone to know how into teenage Japanese girls you are, go fetch….

The Death Smiles Arcade stick will be available in Japan from April for 14,800 yen ($160)
source