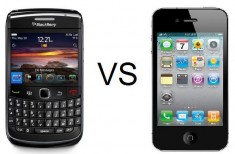 There is now a very wide range of smartphones for individuals to choose from, including Google’s Android, the Palm Pre, and various Nokia models, but there are really only two frontrunners: the Blackberry and the iPhone. There are now definitely “iPhone people” and “Blackberry people.” Which of the devices is best is one of the most discussed of all cell phone topics.

Both Blackberry and Apple have released their latest versions and both are extremely technically efficient and aesthetically pleasing. However, for some, that may be where the similarities end. There are some significant differences between these two devices that all consumers should be aware of before committing to one or the other.

If someone is looking for a chic and sleek, modern smartphone, both the Blackberry and the iPhone pass the test. The iPhone is glossy, compact, and features a cool, one-piece screen: the iPhone just looks cool. However, one of the main attractive features of the Blackberry is its signature enhanced keyboard that makes typing a lot easier. Both phones offer a touchscreen, though in different ways: the iPhone with large icons and simple touch and slide functionality and the Blackberry with the touchscreen and trackball, which can be personalized.

While the iPhone is slightly larger than the Blackberry – 3.5 inches versus 2.8 inches – and has a slightly higher screen resolution, the difference isn’t that noticeable to the average user. Both look great. However, one important difference is that the standby battery life of the Blackberry (12.8 days) far surpasses that of the iPhone (8.3 days).

Personal vs. business use

When it comes to using the iPhone or Blackberry for personal or business use, there is a strong divide. Many businesses continue to use Blackberry products simply because Blackberry was designed with business use in mind – not gaming or personal entertainment. Compared to the iPhone, the Blackberry is far superior for many business functions including easy-to-use mobile email and one-button talking. Though the Blackberry has a slower CPU, its highly functional office applications make up for it. The security features are also quite impressive.

However, the iPhone has a lot more storage, more RAM, and a faster CPU, which are all great attributes for business users. Recently, the iPhone became compatible with the Exchange Server, which all Blackberries use, and this is a great move for integrating with business, but the iPhone does have a ways to go, especially when it comes to security. Additionally, not all networks carrying the iPhone allow for the business use. The iPhone wins out in personal use simply because of the number of apps used for gaming, videos, and personal entertainment.

, it really comes down to personal preference when choosing between the Blackberry and the iPhone. If someone wants a fun device that’s great for playing games and has a lot of applications, the iPhone wins. If you want a tool that excels at messaging and email, the Blackberry is the optimum choice, hands down.

The changing face of home entertainment

Networking Opportunities for Students: Will This Allow Students to Link With Others On a Larger Scale and Improve Education?